How does the global climate change affect the climate of Turkey?

Changes in the climate may differ from region to region in the world. Regional changes could differ from the global trend as well. If we compare the change in temperature in Turkey with that of the globe, we can see some important differences (Figure below). We find that: 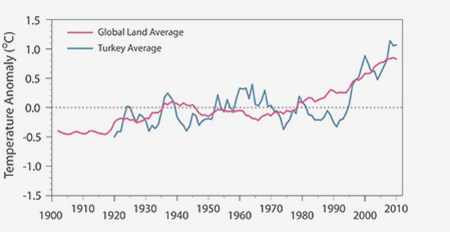 The single most important conclusion from this figure, however, is that the annual temperatures in Turkey are rising. If we study the seasonal temperatures, we can observe the following changes (Figure below): 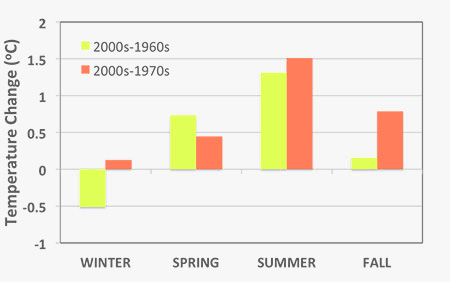 The summer season witnessed the largest temperature increase in Turkey. The warming from 1960s or 1970s to the 2000s is close to 1.5°C.

The spring and fall temperatures also increased but not as much as the summer temperatures. The above changes indicate the extension of the warm season.

Of course, there are other factors than the increase in temperature that indicate climate change is taking place in Turkey. For example, Turkey’s mountain glaciers have been retreating at a pace of about 10 meters per year. Likewise, the snow has begun to melt earlier in recent years, which raises the water level of the snow-fed rivers earlier in Turkey.

These and many other factors are clear indications that climate change is taking place in Turkey.

There is no doubt that it will continue to change in the future in Turkey. It can be predicted that temperatures will further increase. However, there isn’t a single trend with regard to prospective changes in precipitation patterns. Still the primary factors that shape the climate of Turkey can give us hints about the prospective changes in precipitation patterns. There are 5 factors that primarily shape the climate of Turkey: 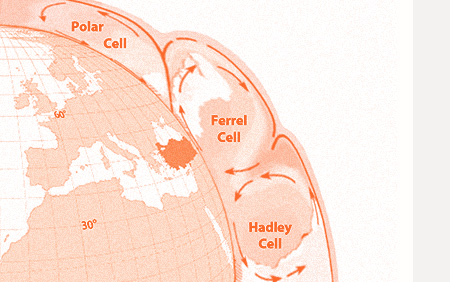 The sun heats the tropical latitudes more than those towards the poles. The heat energy warms the air overlying the surface causing the air to rise. The rising air then cools, the moisture inside condenses, forms clouds, which then generates a lot of rainfall in the tropical areas. The drier air moves towards the poles aloft in both hemispheres and starts to descend around 30° latitude, and the descending air warms in response to increasing pressure. This hinders the formation of clouds and production of rainfall.

Therefore these areas are dry, and they usually comprise the Earth’s largest deserts. Some of the descending air around 30° latitude moves southward, closing the loop. This process is called the Hadley Circulation.

The modeling of climate change suggests that the Hadley Cell in both hemispheres will expand poleward in the future (Figure below). The magnitude of expansion changes from scenario to scenario in climate change modeling. Pessimistic scenarios suggest that the expansion will be about 2° (about 220 km).

Turkey lies between 36-42° north latitudes, and therefore, its southern borders are just 6° (about 660 km) north of the 30° latitude. As a result, Turkey is relatively close to desert areas similar to some southern European countries. 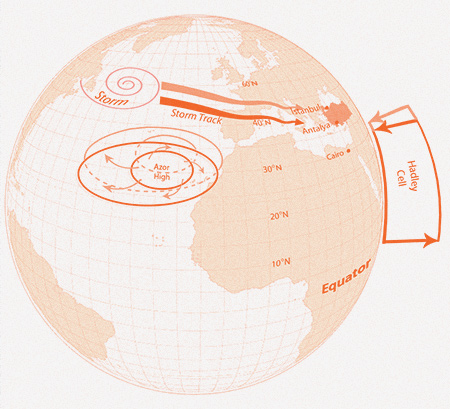 The northward expansion of arid areas will bring the descending arm of the Hadley Cell closer to the southern parts of Turkey, changing its climate features (at present, a similar northward shift causes less precipitation Turkey receives in summers).

Elsewhere, as a result of the same shift, the Azores High will form slightly in the north compared to its present location in the Atlantic Ocean. Turkey receives much of its precipitation through storms, originating from the northern Atlantic. A northward shift in the location of the Azores High will inevitably push the storm tracks northward, thus causing fewer numbers of intense storms to reach and affect the southern parts of Turkey. Such a change will clearly result in less precipitation in these areas. On the other hand, the northward motion may cause higher amounts of precipitation in northern parts of Turkey.